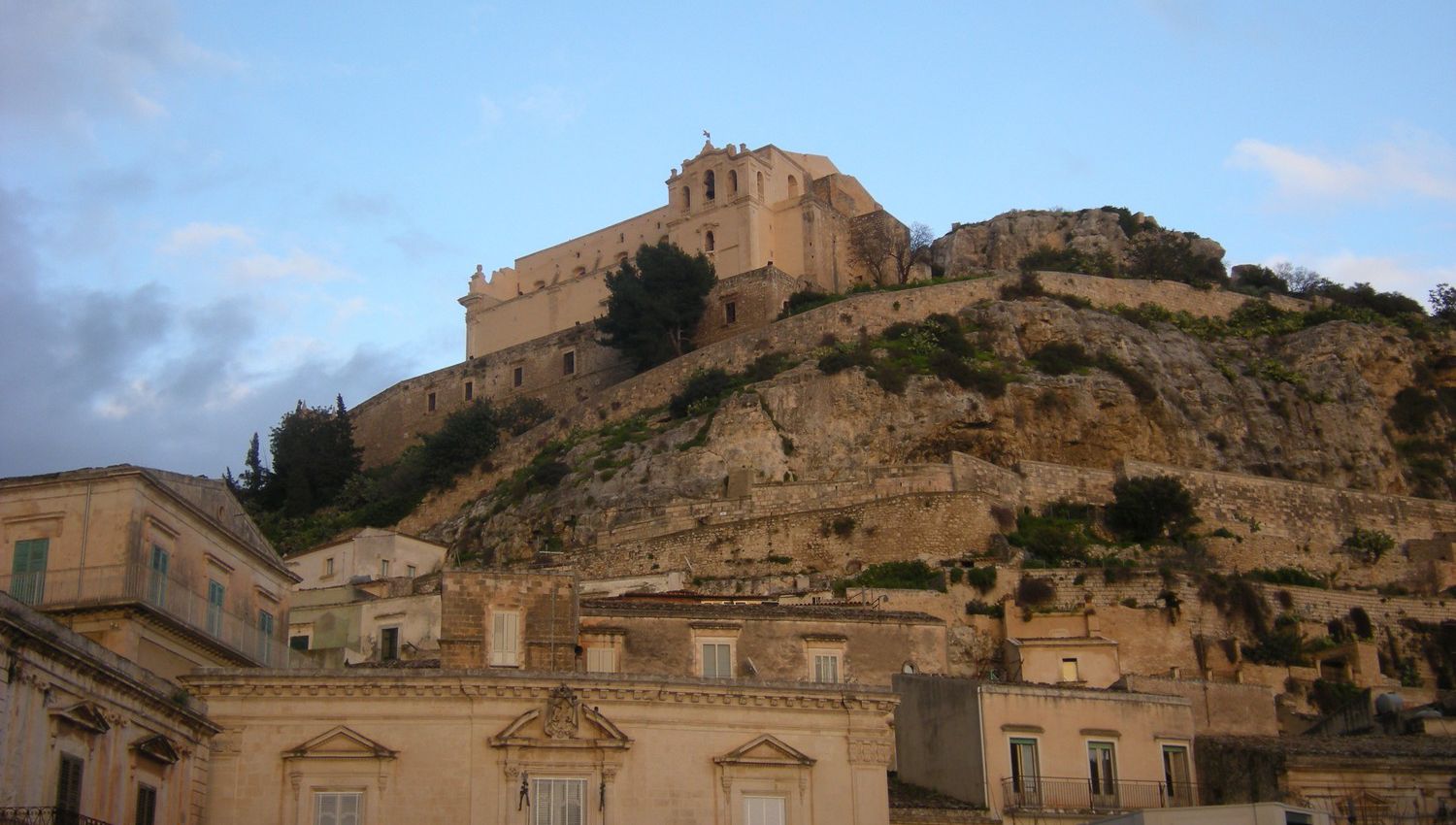 Scicli (the city of the three valleys)

The city of Scicli (Unesco World Heritage Site since 2002) is inhabited by about 27,000 inhabitants, extends over a plain embedded in three narrow valleys, locally known as the Cave (the valleys of Fiumelato, Santa Maria La Nova and San Bartolomeo). Each of these has dug deep gorges in the limestone plateau that today characterize the landscape. The modern city lies in the basin where these three canyons converge.

The city, one of the most fascinating in Sicily, is dominated by the imposing church of San Matteo and by the remains of the castle of the “tre Cantoni” on the hill of the same name and by the Convent of the Cross complex, it is also generous with civil and religious monuments and Baroque architecture. . The city has a seventeenth-century urban layout, with two Unesco sites: the eighteenth-century via Mormino-Penna and Palazzo Spadaro.

The origins of the city are very ancient and some authors lean towards the Sicilian period, therefore over 3000 years ago. The name derives from Šiclis, one of the names used to indicate the Sicilians. The presence of man in the area is already dated to the Aeneolithic, as demonstrated by the findings made at the Grotta Maggiore dated between the Copper Age and the Ancient Bronze Age (III-II millennium BC – XVIII-XV century BC) . Greek finds at the mouth of the Irminio river (The Master’s emporium) testify to the contacts of the local population with the Greeks. In addition to the Greek remains, traces of Carthaginian existence were found, which were present on the island until the Roman conquest in the third century BC.

Following the Arab domination, Scicli experienced a period of considerable agricultural development and economic prosperity. Historical tradition dates back to 1091 the liberation from the Saracens by Count Ruggero D’Altavilla following a legendary battle fought in the Donnalucata plain. Two serious events characterized the life of the population: the plague of 1626 which reduced the residents by two thirds and the terrible earthquake of 1693 which caused 3000 deaths and the destruction of most of the city and other cities of the Val di Noto. From this disastrous seismic event Scicli was reborn in a Baroque key and today is characterized by numerous secular and religious buildings of the eighteenth century.

The city is home to three icons of great emotional impact: The Christ of Burgos, or Christ in a skirt, a Spanish painting of the late seventeenth century kept in the church of San Giovanni Evangelista, the statue of the Madonna delle Milizie, the only warrior madonna in the whole Christianity preserved in the Mother Church of Piazza Italia and the Risen Christ, also known as “Il Gioia” or “Man Alive”.

The municipal territory extends from the sea to the southern offshoots of the Iblei mountains. The landscape you encounter is varied, starting from a low and sandy coast to a coast with modest limestone cliffs, and continuing towards the hinterland, from gentle slopes of alluvial origin cultivated with carob, olive and almond trees, up to the Hyblean limestone plateau. where the city stands. There are several torrential rivers that run through the municipality of Scicli, except the Irminio river which delimits the western boundaries with the municipality of Ragusa.

In the province of Ragusa, Scicli is the city that has the greatest projection on the coast, with 22 kilometers of beaches and rocks and four hamlets: Playa Grande, Donnalucata, Cava d’Aliga-Bruca and Sampieri.

Since 1998 Scicli has become world famous as the television “Vigata” of the “Commissario Montalbano”. In fact, the city is home to the police station, a film set that can be visited all year round. Over the last twenty years, Scicli has combined a flourishing agriculture, first in the open field, then in the greenhouse, with an increasingly strong tourist vocation.

The Ibleo territory is of considerable historical and naturalistic interest. There are numerous archaeological presences of ancient local populations and civilizations attributable to late ancient, Greek, Roman, Arab, Byzantine, Norman, etc. The monuments and buildings of the historic centers are characterized above all by Baroque architecture which finds expressions of singular beauty in Modica, Scicli and Ragusa. The peculiarity of the Ibleo landscape is that of the countryside with dry stone walls, of the extensive carob and olive groves, of the mule tracks and of the karst valleys, but also of the exceptional and unique naturalistic and landscape areas that attract many tourists every year. The Hyblean plateau is also characterized by the presence of a great environmental and landscape heritage with natural reserves (Macchia forest of the Irminio river), SIC areas (Irminio River, Conca del Salto, Contrada Religione, Upper course of the Irminio River) and habitats unique for their naturalistic relevance. The rural landscape is formed by a largely limestone plateau, engraved by deep karst river valleys, commonly referred to as the “Cave” that were formed as a result of the incessant erosive action of rainwater and flowing waters. In the quarries, real refuge areas, a high number of species of scientific and biogeographical interest of Mediterranean flora and fauna can be found. Even the coastal and marine environment present a significant attractive force for tourist flows, thanks to the long and sandy beaches and the suggestive rocky coasts, such as the extra-urban park of Costa di Carro in the territory of Scicli, or the marshes of the Municipality of Ispica. , a treasure trove of sedentary and passive avian fauna in Sicily, typical of this strip of land.

The new rural tourism project of the Sicilian South-East takes the name of Iblea Hospitality, concentrated in the territories of Ragusa, Modica, Scicli and Ispica and financed by the funds made available by the RDP Sicily 2014/2020 measure 16.3, used to achieve development , the strengthening and innovation of rural tourism in the Hyblaean territory.

The Temporary Association of Purpose (hereinafter ATS) for the realization of the cooperation project “Iblea Hospitality – Services for rural tourism” is set up between the V. Service farm of Piero Virderi, which has assumed the functions of leader , and the other actuators: Giro di Vite srls. of Ragusa, Le Terrazze di Ibla srl., P.One srl., Echo ADV of Bracchini Giovanni. Born with the aim of consolidating an innovative rural, cultural, landscape and naturalistic identity of the area, Ospitalità Iblea wants to involve all the tourist actors of the territory who want to be part of it, first of all the farms producing typical products, the agritourisms, restaurants, etc., bringing together the various stakeholders under the aegis of the brand “Iblea Hospitality – Services for rural tourism”, thanks to which they will be able to recognize themselves in the quality and traceability of the territory itself, underlining the vocation of the latter towards rural tourism, promoting all the activities of reception, catering and organization of free time and the provision of any other service, aimed at the tourist enjoyment of the naturalistic, environmental and cultural assets of the rural territory.

The project partners will be involved in the activities of promotion and marketing of services for rural tourism, aimed at the tourist use of the naturalistic, environmental and cultural assets of the rural area, with the main purpose of encouraging the seasonal adjustment of tourism in the Hyblean area, increasing its flow of visitors and their average stay, thus making the Iblea Hospitality brand immediately recognizable.

“The Iblea Hospitality project aims to represent the Iblean territory in its peculiarities, in a journey that has more the flavor of the experience to be lived” – this is the comment of Dr. Virderi, owner of V. Service in Scicli, leader of the project. “Enhancing our beautiful territory, also and above all through the help of technological innovation, will allow us to reach the traveler anywhere in the world, emotionally involving him even before his arrival and, once here, make him feel the real protagonist of a unique and extraordinary territory “.