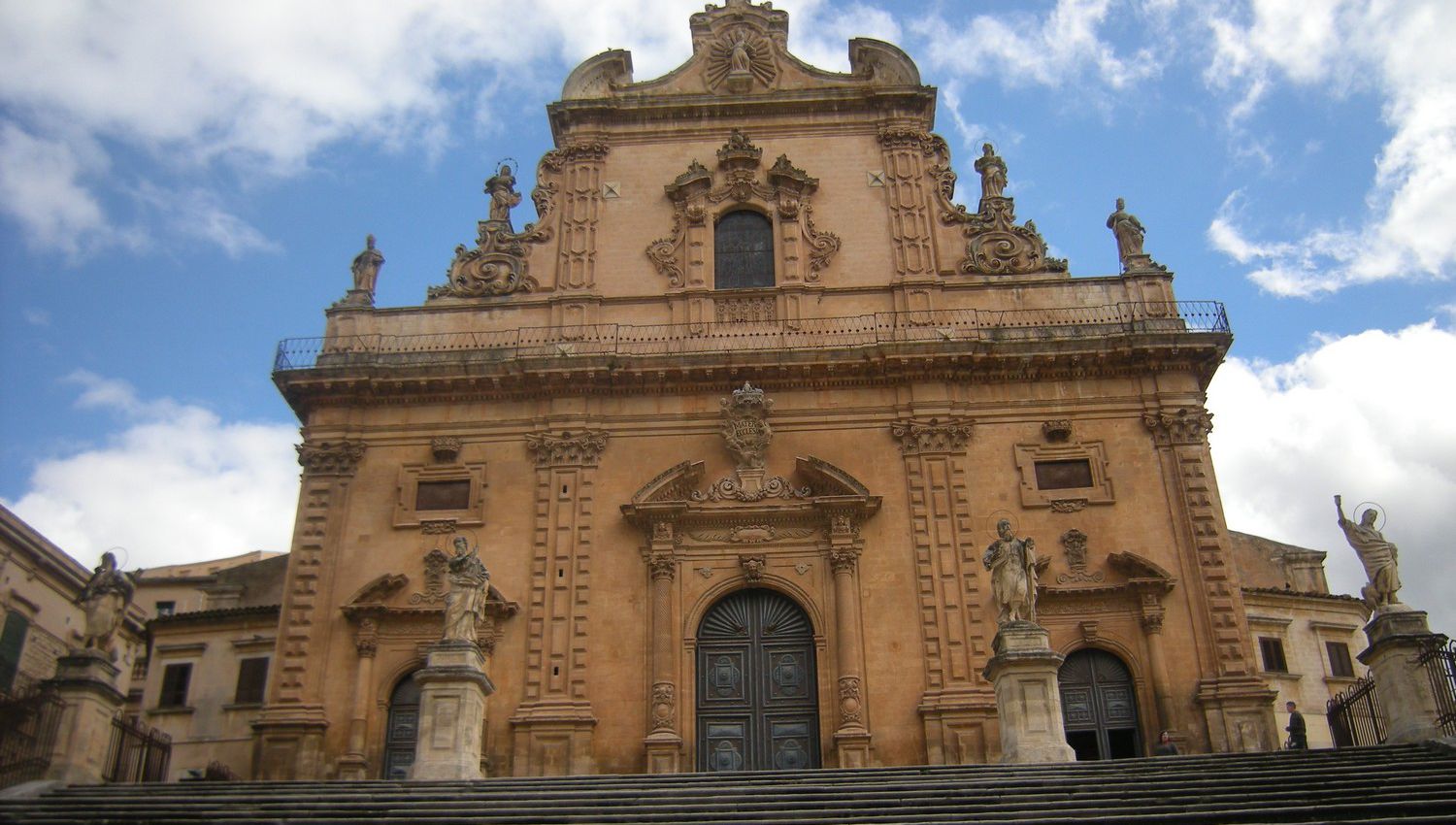 The city of Modica (Unesco World Heritage Site since 2002)

The city of Modica (Unesco World Heritage Site since 2002) stands on the confluence of two torrential rivers that divide the plateau into four hills: Pizzo, Idria, Giganta and Monserrato. Its historic center is rich in civil and religious Baroque architecture and is located about 15 km south of the provincial capital. The city of Modica, whose etymological name derives from the Phoenician Mùtika (hotel, residence), or from the Sicilian Mùrika (bare rock, not cultivable), develops on an extensive plateau crossed by deep karst canyons. The two rivers that cross it, Pozzo dei Pruni and Janni Mauro (now dry and covered in the urban stretch), join to form the Modicano, whose bed that crosses the city was covered in the early twentieth century, becoming the today’s Corso Umberto I, that is, the main axis of the city. The historic urban core is divided into two areas: Modica high with the buildings that “climb” the sides of the hills and Modica low which develops in the valley around Corso Umberto I. The modern city, Modica sorda, develops towards the south on the hill Monserrato. The municipal area is very vast, and develops starting from the slopes of the Iblei Mountains and, gently sloping down towards the coast from an altitude of 550 m a.s.l., until it overlooks the Sicilian Channel with the seaside villages of Maganuco and Marina di Modica.

The houses of the old city are leaning against each other and are often mere extensions of ancient caves dug into the sides of the limestone hills and inhabited since prehistoric times. About 700 caves have been surveyed. The urban fabric is, in fact, an intrigue of houses, alleys and long stairways, which recall the medieval layout of the historic center, which was wrapped around the spur of the Pizzo hill, on which an inaccessible castle rested.

The area where today’s Modica stands was populated first by the Sicans, later by the Phoenicians and finally by the Sicilians who occupied south-eastern Sicily to the detriment of the Sicanians. The real foundation of the various Sicilian cities can be traced back to 1360 BC, 80 years before the Trojan War. In Roman times it was mentioned by Cicero as one of the most fertile territories of the Empire. It was conquered by the Arabs in 844/45 and then by the Normans for about two and a half centuries. It was during the domination of the Aragonese of Spain that the county of Modica reached its greatest splendor. The county was administered, alternating in power, by the Counts Mosca, Chiaramonte and Cabrera who for power and wealth had nothing to envy to the sovereign. Under the dominion of the Chiaramonte an artistic style developed which took the name of Chiaramontano and which found its maximum expression in the construction of the numerous castles that the family owned throughout the island. In 1296 the county of Modica merged with Ragusa and in 1366, under the leadership of Manfredi III Chiaramonte, the county acquired the lands of Terranova (Gela) and of the whole Maltese archipelago, thus reaching its maximum splendor. In 812 the County ceased to exist with the abolition of feudalism. This glorious past was unfortunately destroyed by the earthquake of 1693, leaving only some monuments such as: the Portale De Leva, the facade of the Carmine, the Portal of Santa Maria di Betlemme, the Church and the Cloister of S. Maria del Gesù.

Tourism is growing strongly also thanks to the inclusion in the UNESCO Heritage List and the contribution of the characteristic Modica chocolate exported all over the world, and to the location of the well-known television series Inspector Montalbano. The growth trend of tourism has benefited from the success of the Chocobarocco event, dedicated to the artisanal production of chocolate, which has made the city firmly included in the food and wine tourism circuits.